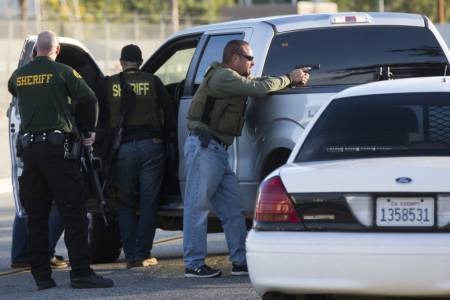 On Thursday, January 4, 2018, the San Andreas County Sheriff's Office received multiple 911 calls about an armed female at approximately 12:02 PM in the 1700 block of Main in Montgomery, San Andreas.

The preliminary investigation revealed that the female had fired multiple shots in the Montgomery area.

Once deputies responded to the area, the female bolted into a black Dodge Caravan occupied by masked men and lead deputies on a 3-mile chase to Dillimore, San Andreas. Where the subjects bailed out of the vehicle and bolted into a flat.

The district two supervisor, Staff Sergeant Mason Nadler quickly established a perimeter and called for Special Weapons and Tactics deputies to respond to the scene.

The Special Weapons and Tactics Team ordered the suspects out of the residence and they were detained without further incident.

The Sheriff’s Office Criminal Intelligence Unit, Gang and Narcotics Detective's spearheaded the search of the suspect's house, which uncovered over an ounce of marijuana, and a fully loaded .50 Desert Eagle.

Staff Sergeant Mason Nadler told public affairs, "After I arrived on scene I called for SWAT and we breached the apartment, 2 suspects were detained outside and 2 inside the apartment after found hiding in the bathroom. I called for a K9 unit and we started to search the apartment for any Narcotics or firearms, after a long search 20 grams of weed and a Deagle was found hidden"

The victim, nor the suspects, suffered any injuries during this incident.


Anyone with information regarding this incident is urged to contact the Sheriff’s Office Criminal Intelligence Unit. Callers wishing to remain anonymous are urged to call We-Tip Hotline, or you may leave information on the website at [email protected]
© San Andreas County Sheriff's Office, 2018