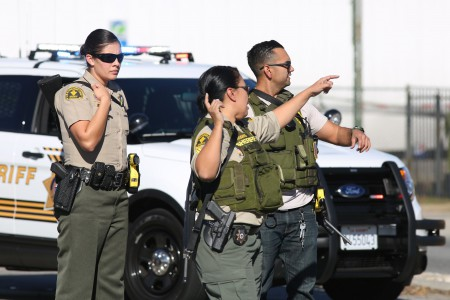 On Wednesday, January 3, 2018, the San Andreas County Sheriff's Office pulled over what they believed to be a vehicle of a suspect at approximately 4:55 PM in the 200 block of Vale View in Palomino Creek, San Andreas.

The preliminary investigation revealed that an armed white male exited his vehicle and approached the primary deputies with a 9mm handgun with a silenced modification in front of 2 Vale View. The suspect then fired multiple shots at deputies.

During this encounter, two San Andreas County Sheriff Office deputies were injured as well as the male firing the weapon. The passenger of the vehicle was subsequently taken into custody and deputies recovered two handguns from the incident.

Deputies and the suspect were transported to Crippen Memorial Hospital. With life threatening injuries.

The San Andreas County Sheriff's Office has handed the investigation over to San Andreas Department of Law Enforcement due to deputies being involved.

Anyone with information regarding this incident is urged to contact the San Andreas Department of Law Enforcement. Callers wishing to remain anonymous are urged to call the Tip Hotline, or you may leave information on the website at [email protected]
© San Andreas County Sheriff's Office, 2018